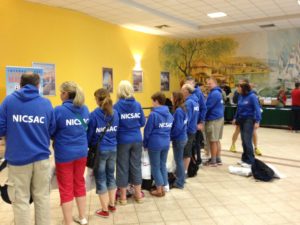 The Northern Ireland Civil Service Athletics Club (NICSAC) began its life in 1957 as part of the post war return to normal which highlighted the rise of sport on the return of men and women from war time service. The early club was focused on athletics track events and its membership located largely on the Stormont Estate. At one stage it made a bid for a ‘cinder track’ on the estate but was turned down. It never seemed to recover and despite a good start in terms of numbers, it went into decline as the end of the decade approached and was eventually wound up in 19??. Who knows if that ‘cinder track’ had been built would we now have the Stormont Olympic standard athletics stadium?

In 1995 Ray Murray approached the NI Civil Service Sports Association (NICSSA), the parent body for all Civil Service sporting organisations, to establish if support and funding could be obtained to establish an Athletics club to promote running for civil servants. This was on the back of the re-emergence of distance running and the Belfast Marathon (1982) in Northern Ireland. NICSSA was very supportive and a constitution was drawn up in 1995 with a small group of ‘running friends’ – Michael Kelly, Joe Quinn, Ray Murray and Tom Watson making up the first committee. On 4th October 1995 the club was accepted for affiliation to NICSSA and on 28th November 1995 it was accepted for affiliation to the Northern Ireland Amateur Athletics Federation – now known as Athletics NI. The committee approved the club colours (white vest with yellow and blue side bands and blue shorts) as well as the club logo. The first club AGM was held in December that year and in the early years the club membership stood at about 80 civil servants drawn from all over Northern Ireland and from all departments.

From early on it was clear that the club was going to focus on road and cross country running. In 1996 it was decided that the club should organize a Cross Country event on the Stormont Estate. This was to be the ‘flagship’ for the NICSAC and advertise it amongst the other running clubs in Northern Ireland. The event was a senior event, open to all, but contained a civil service championships as well. This was the first time that the Stormont estate had been used for a cross country race and the event has been held annually ever since, with the exception of 1999. The success of the Civil Service cross country opened up the estate as an important venue for athletics and in 1999 it played host to the IAAF World Cross Challenge. A 10-mile Road Race with a perpetual trophy for the first civil servant was also established in 1996.

At the heart of the club was a core of distance runners who, although they ran at all distances and on all surfaces, had their eyes fixed on the longer road races especially the marathon. To some extent this is still true today. However it wasn’t entirely a ‘blank sheet’. Before the club was formed a number of individuals had taken part in England in the UK Civil Service Marathon Championships. These included Sammy (screen saver) Walker, Tom (elbows) Watson, Erwin (the bike) Cameron and Jim (thrifty) Patterson. They had achieved considerable individual successes but with the formation of the club a new golden era was about to begin. As part of that era the 1990s also seen the start of the club marathon trips abroad with Berlin and Athens being two early adventures.

In 199?, for the first time, a NICS Marathon Team of NICSAC members; Jim Breen, Joe Quinn and Ray Murray took fourth place and just missed out on the medals in the Armed Forces and Civil Services Marathon Championships in Lincoln. Given the team averaged sub three hours this was a significant achievement for their first effort at such a major event. They were back with the addition of Michael ?? the following year in Nottingham and took silver medals. This was followed by a haul of Golds and Bronze medals along with a few near misses as the event alternated between London and Nottingham in subsequent years.

Individual successes at the UK Civil Services Championships were also recorded most notably by Jim Breen. Over the years new team members such as John O’Hagan, Neil Corken, Barry Lowry, Marcus McAuley and Roy Nash joined the team and all were key to continuing successes in different years. A number of local successes were achieved with club members bringing in wins as well as age category victories in local events. Likewise the introduction of the Belfast Marathon Relay saw NICSAC teams feature in the top dozen places.

The NI Civil Service Athletics Club’s achievements during the 1990s and early 2000s can be seen in that it had four members nominated over a number of years for the Bloomfield Trophy at that time. The Bloomfield trophy is the highest award the NI Civil Service gives for either Success in Chosen Sport or Success in Administration of Sport. In that era; Jim Breen, Joe Quinn, Robbie Burrows and Ray Murray were all nominated with Ray winning, for Success in Chosen Sport, in 1999?. In addition the club also won the NICS Sports Association best team of the year for its marathon exploits in GB. Recognition continues with this now been added to by Michael Kelly being nominated and winning the 2010 Bloomfield Trophy for Success in Sports Administration.This was repeated a couple of years later when Robbie Burrows also won the Bloomfield Award for Sports Administration for 2013.

As well as the Stormont Cross Country the club, in conjunction with East Down AC, resurrected the Portaferry 10 Mile Road Race in 2005 and saved it from the dustbin of history. The East Down AC link is through Joe Quinn a founding member and one of the early stalwarts of NICSAC who is also the driving force behind East Down. Thanks to the support of the Portaferry Gala Committee, UP & Running, and laterally Pure Running, this is now a very successful event and one of the best road race fixtures at the classic distance in Northern Ireland. It also includes a five mile relay that is also growing in popularity. As well as being a great race with competitors from all over Ireland and further away taking part, it raises significant funds for the Gala Committee and the local community.

The club has established internal competitions for club members which include 10km, 10 Mile, Half Marathon, Marathon championships and a 5km Handicap Trail Race. A Competition Series event was introduced in 2013 in which members can accrue points for competing in the championships events. In 2016 an age graded event based on parkrun was introduced.

In 2010 the club also helped to establish the Greyabbey 10K and 5K fun run which attracted over 200 participants and again raised funds for the charity Helping Alopecia Trust (HAT). In addition to new events, thanks to the work of the current club committee members and the vision of Robbie Burrows in particular, the existing Cross Country was extended to include a Primary School age race which is now the biggest in Northern Ireland.

No history of the Northern Ireland Athletics Club could be complete without mention of its running trips abroad. Since its foundation the club has seen trips organized and members taking part in: Berlin, Athens, Rotterdam, Paris, Amsterdam, Rome, Vienna, Budapest, Modena, Lake Garda, Verona and Palma. It has also featured at so many Dublin Marathons it would be hard to count them. These are best described as running adventures and often form the material for the now established annual Christmas dinner awards.

The history and progress of the NICS Athletics Club and its events are a tribute to the endeavours of its individual members. In addition it provides support for the communities that the events are held in and the various charities they support. This voluntary work has enhanced the reputation of the Civil Service in general. From its humble beginnings as a group of running friends, the club’s impact on the running scene in Northern Ireland can clearly be seen and its reputation is now widely known.